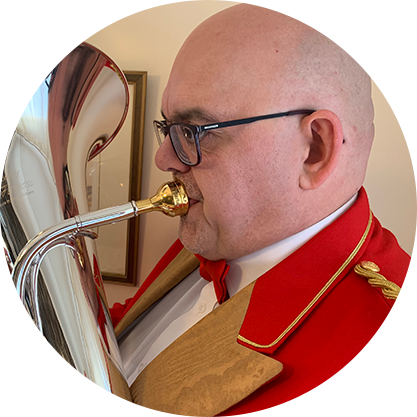 Glyn Williams was born in Aberystwyth where he was introduced to music by his Uncle and enjoyed playing euphonium with Towyn Silver Royal Oakley and Menai Bridge, all local bands.

Glyn was appointed as solo euphonium with the Foden’s Band in 1995 contributing to many contest victories including the Swiss Open, All England Masters, French Open, Brass in Concert, North West Area Finals more than 10 times, the titles of National & British Open Brass Band Champions of Great Britain, English National Champions and All England International Masters Champions. 2012 was the pinnacle of this contesting success when Foden’s won both the Open and National Championships.

After 20 consecutive years service at Foden’s Band, Glyn took the heart wrenching decision to move to South Wales and to join the Cory Band in the Summer of 2015, beginning a whole new chapter in his brass banding career. Since then Glyn has been pivotal in helping Cory to make history in an unprecedented Grand Slam year of 2016, when the Band won the European, British Open, National and Brass in Concert titles. Glyn has been awarded many best instrumentalist awards along the way, the most recent having been at the 2017 European Brass Band Championships in Ostend, Belgium. In 2019 Glyn was a part of the Cory Band as they again achieved the Grand Slam…..and added the BrassPass UK Band of the Year title to their accolades.