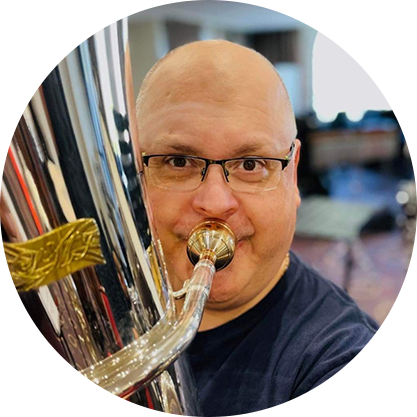 Dean Started playing the BBb tuba for the Morris Motors Brass Band at the age of 14, under the musical direction of Harry Mortimer. He also joined the NYBBGB gaining the position of Principal BBb tuba, playing in concerts under conductors such at Eric Ball, Major Peter Parkes, Richard Evans, Elgar Howarth, Roy Newsome, and James Watson. At 16, he joined the Desford Colliery Band, and was conducted by Howard Snell and James Watson where he was part of the magical team that won the National Brass Band Championships of Great Britain four times in succession. After touring extensively throughout Europe and completing tours of the USA and the USSR playing in the Tchaikovsky Hall in Moscow, he then joined Fodens Brass Band.

This led to contest wins at the Swiss Open, French Open, and further Nationals success under Nick Childs. Whilst at Fodens, Dean had the privilege of being conducted by Howard Snell, James Gourlay, Phillip McCann and Bramwell Tovey. Dean was also a featured soloist on the Fodens Courtois Soloists CD.

After Fodens, Dean joined the famous Grimethorpe Colliery Band where he toured Europe, Australia, New Zealand, Hong Kong, and the USA. He was conducted by Professor Gary Cutt, and played in concerts to capacity audiences in iconic venues such as the Sydney Opera House and the Carnegie Hall. After a string of Brass in Concert successes, and two more Nationals wins (narrowly missing a hattrick), Dean moved to Brisbane Australia to be with his tuba playing partner Julie Woods. Once there, he played for the National Australia Brass Band conducted by Professor David King, and joined the Brisbane XLCR Brass Band where he won the Australian and New Zealand Brass Band Championships multiple times. He then moved on to play with St Mary’s Brass Band, Central Coast Brass (National Champion winners 2018), and he now resides with the Sydney City Brass who are the current National Brass Band Champions of Australia under the leadership of the highly sought-after Professor Jason Katsikaris.