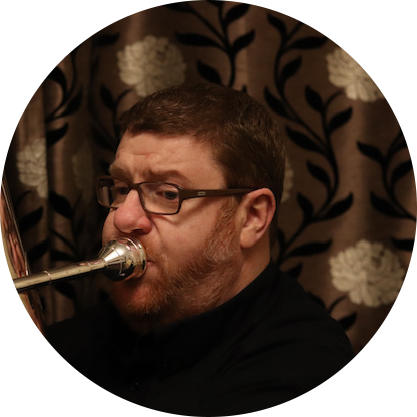 Joining the Blackburn and Darwen band organisation soon after, Andy quickly progressed to the Senior Band under Alec Evans, whilst joining the Lancashire Youth Brass Band and the Intrada Brass Ensemble (a brass 10 piece) shortly after. Tutoring from Peter Read, Fred Bowker and guest conductors like Les Beevers and James Gourlay were a great inspiration at LYBB, whilst the different genre of Intrada taught many ensemble skills.

Whilst at Salford College Andy was taught by Andrew Duncan, and made the move to Kennedy’s Swinton band, then onto Britannia Building Society (Foden’s) in the early 1990’s, where winning the 1992 European Championships with Howard Snell was a highlight.

Since then, Andy has been a member of the Besses o’th’ Barn, Fairey, Freckleton (player and Chairman) and Brighouse and Rastrick bands before rejoining Foden’s in 2016.

Alongside Brass Bands, Andy has continued playing Tuba with Intrada Brass, (guesting with both JSVB and Corus Brass) as well as performing with many Orchestras, Theatre Bands and Big Bands on both Tuba and Bass Trombone, sharing stages with artists like James Morrison, Allen Vizzutti, Bobby Shew, Jens Lindeman, Martin Roscoe, Mike Lovatt and Matt Ford.

As well as Brass Band recordings, Andy has performed on Film soundtracks as well as Radio and TV programmes with Orchestras and Big Bands.

Andy Cattanach is a Lancashire born BBb Tuba player who has played with many of the UK’s top brass bands, and is currently Principal BBb Bass at Foden’s Band, a position also previously held at the Fairey and Brighouse and Rastrick bands. Andy is also the Tuba player with the Intrada Brass Ensemble, as well as performing with many local Orchestras and Big Bands on both Tuba and Bass Trombone.